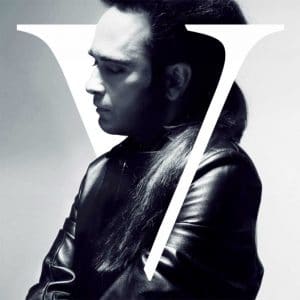 With his band Deine Lakaien, Alexander Veljanov is decisively influencing the German and European music scene since two decades now. He became a unifying figure with his special voice in a conflict area of two components, which seemed to exclude one another antagonistically in the first place – Dark Wave and avant-garde, Veljanov is working unremittingly with his Deine Lakaien partner Ernst Horn until he is reaching the point of creative exhaustion, after the work for the album “White Lies” in 2003. He had the desire for pausing a while and returning to his roots. Back then he did not know that this wish would mark the start of a new work phase.

Alexander Veljanov is feeling home in Germany and Macedonia. For too long he was sacrificing his second home for work. Suddenly, he started asking himself about his relationship to his roots and he went back to Macedonia. “The situation was a little paralyzed, because of the Yugoslavian war”, the singer recalls. “Although, Macedonia was not as much involved into the war as other former Yugoslavian states in the nineties, but I was not able to imagine travelling there as unprejudiced as I did before. I kept superficial contact, but basically this part of the world was faded out of my head. I went to Macedonia in 2003. I met old friends and started working without any pressure. There was no record label behind me waiting for products and I was able to do everything the way I wanted.”

The album with the meaningful title “Porta Macedonia” is the result of this long-term project. After listening to a few sounds it is obvious that Veljanov remains true to himself. Nevertheless, he is accepting new challenges. The withdrawn vocalist never revealed so much about himself before. While working on the album “Porta Macedonia” he went back to a world he knew from before – he found again many things, but others radically changed. Especially the western European truth changed over the years. In Macedonia Veljanov suddenly had the chance to view European fate from a whole different angle. With “Porta Macedonia” the audience has the exceptional chance, accompanying an artist rediscovering himself. Everybody who liked Deine Lakaien or Veljanov’s previous solo projects, will find everything they are looking for in “Porta Macedonia”, and yet will find completely new sounds at the same time. It feels like floating into a mystical room full of magical attraction and secrets. Veljanov is using byzantine and orthodox elements for his music, his singing sounds almost sacred. Beside the classical rock instruments, bugle players and strings he is also working with a crumhorn, the kaval (Macedonian flute), which is very difficult to play and the zurla, a Macedonian form of the oboe. Compared to the before mentioned instruments, the Hammond organ, theremin and synthesizer are representing a pretty diametric sound. Nevertheless, these different sound aspects are deeply combined so that it is difficult to separate traditional and modern instruments. The bard is building bridges to connect intimate perceptions and global events, the Balkans and Western Europe, former eastern European History and today.